OpenMUL has been selected as SDN platform of choice for advanced multi-site & multi-city IoT infrastructure project which will utilize core values of SDN/NFV to build innovative, flexible & scalable IoT provisioning & monitoring cloud framework. This project will be handled by multi-company consortium led by NTELS and funded by Institute for Information & Communications Technology Promotion (IITP), Govt of South-Korea.

After a stringent evaluation of various SDN controllers, OpenMUL was selected based on its scalability, performance and its flex-plug modular architecture which are must have for a project of such a big scale. The fact that OpenMUL can easily work as a geo-distributed cluster using MBGP (multi-protocol BGP) and can be easily extended to support new south-bound protocols in addition to Openflow were the major points why the consortium decided to choose OpenMUL. 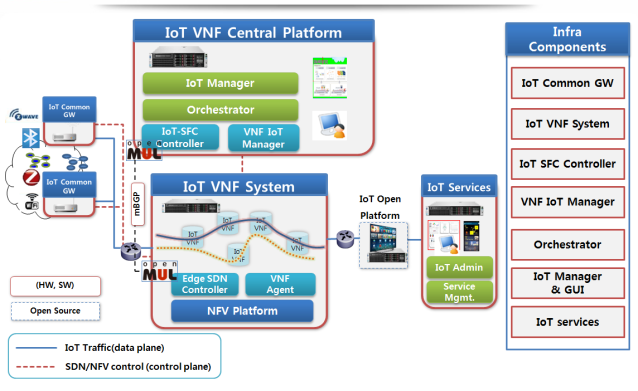 As seen in the figure, OpenMUL will be used to control IoT common gateways (using Openflow and other south-bound protocols) and provision multi-site dynamic service chaining in conjunction with IoT management platform.

OpenMUL team thanks everyone involved and will extend its full support for success of this project and its deployment in making future IoT enabled smart cities.